How does one calibrate the navX-sensor gyroscope and accelerometer on the VMX Robotics Controller?
The navX-sensor orientation sensors require calibration in order to yield optimal results. We highly recommend taking the time to understand this calibration process – successful calibration is vital to ensure optimal performance. Accurate Gyroscope Calibration is crucial in order to yield valid yaw angles. Although this process occurs automatically, understanding how it works is required to obtain the best results.

If you are tempted to ignore this information, please read the section entitled “The Importance of Stillness” at the end of this page.

The navX-sensor Calibration Process is comprised of three calibration phases: 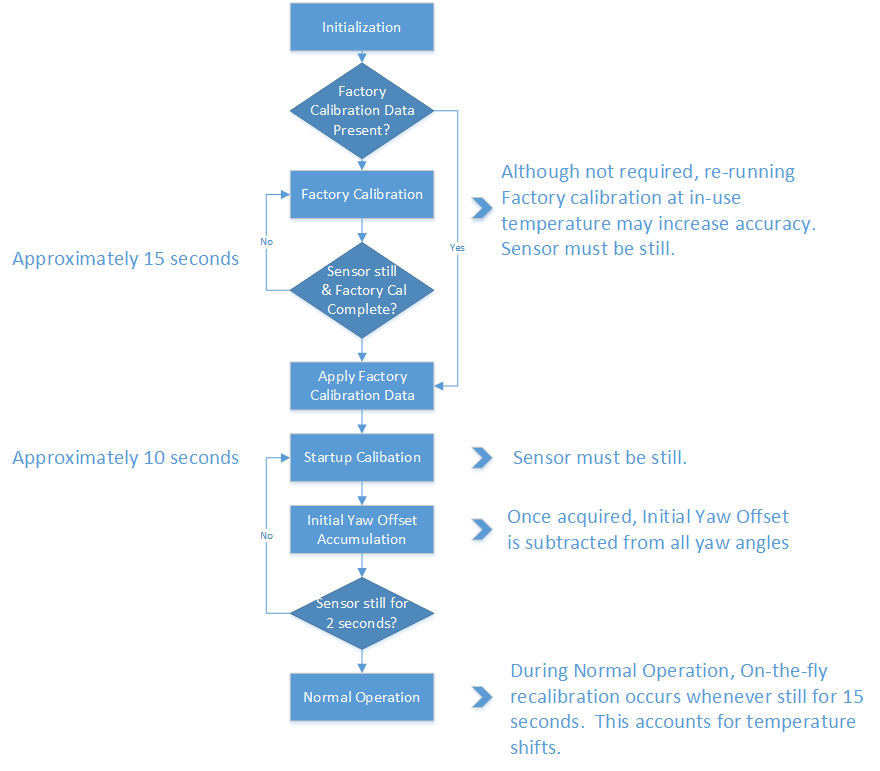 Note that the onboard gyroscopes are sensitive to temperature changes. Therefore, since the average ambient temperature at the factory may be different than in your environment, you can optionally choose to re-calibrate the gyroscope by pressing and holding the “CAL” button for at least 10 seconds. When you release the “CAL” button, ensure that the “CAL” Led flashes briefly, and then press the “RESET” button to restart navX-Micro. When VMX-pi is re-started, it will perform the Initial Gyro Calibration – the same process that occurs at our factory. NOTE: It is very important to hold VMX Robotics Controller still, and parallel to the earth’s surface, during this Initial Gyro Calibration period. You might consider performing this process before using your robot the first time it is used within a new environment (e.g., when you arrive at a robotics competition event).

Startup Calibration occurs each time the VMX Robotics Controller is powered on, and requires that the sensor be held still in order to complete successfully. Using the Factory Calibration as a starting point, the sensor calibrates the accelerometers and adjusts the gyroscope calibration data as well based upon current temperature conditions.

If the sensor continues to move during startup calibration, Startup Calibration will eventually timeout – and as a result, the navX-sensor yaw angle may not be as accurate as expected.

Yaw Offset Calibration requires that VMX Robotics Controller be still for approximately 2 seconds after Startup Calibration completes. After approximately 2 seconds of no motion, the navX-sensor will acquire the current yaw angle, and will subtract it from future yaw measurements automatically. The navX-sensor protocol and libraries provide a way to determine the yaw offset value it is currently using.

In addition to Startup Calibration, during normal operation the navX-sensor will automatically re-calibrate the gyroscope (e.g., to account for ongoing temperature changes) during operation, whenever it detects 8 seconds of no motion. This process completes after about 7-8 more seconds, and is completely transparent to the user. Therefore each time the VMX Robotics controller is still for approximately 15 seconds, the gyroscopes are re-calibrated “on-the-fly”. The purpose of On-the-fly Gyro re-calibration is to help maintain yaw accuracy when shifts in ambient temperature occur during operation.

Your robot software can optionally provide the robot operator a way to reset the yaw angle to Zero at any time, under software control.

The importance of stillness

This is the most important takeaway from this discussion: It is highly-recommended that the VMX Robotics Controller be held still during the above Initial Gyro and Initial Yaw Offset calibration periods. In support of this, the navX-Sensor indicates when it is calibrating; we recommend you incorporate this information into your software. Please see the discussion of the navXUI, and the the navX-sensor software library for more details on this indication.